Before you ask: yes, I do have a folder of Mass Effect mods solely with the purpose of writing up in an effort to keep geeking out with the Mass Effect fans in our community. Moving on: after I shared the weirdest of the weird mods with a “Juicy” sexy Hanar mod, I found another modding project that I knew would be a big hit with some of readers based on the way too many comments we get about it. In various scenes in the Mass Effect remaster, shifts in camera angles can be seen, including one infamous scene regarding Cerberus’ Miranda Lawson. This mod restores the original Mass Effect trilogy Miranda “butt shots” but with an added joke twist.

Miranda Buttgate 2021, the new Puddlegate of a generation. There was a scene, in particular, that was addressed in the Mass Effect Legendary Edition where Commander Shepard and Miranda are discussing the fate of her twin sister, a sister that her father is looking to kidnap. It’s a very emotional scene and it’s a discussion that lets the player see a more vulnerable side to this character throughout the events of the second game. So when almost the entire heartfelt convo happens, the camera panned to the below angle, and the angle that BioWare’s Kevin Meek says was not originally intended, but it wasn’t addressed either. 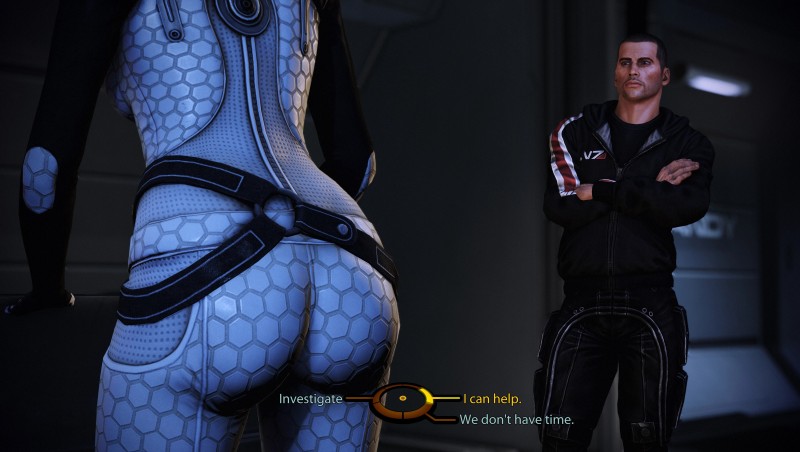 When the trilogy was first released, the conversation of the weird camera angle was a big talking point in the community. Not from a censorship angle, more just talking about how it was bizarre. There are a few scenes like that, and not just with Miranda. Close-ups of Thane, Jacob, and even Zaeed’s assets were prevalent throughout the series, making comedic camera angles something that could potentially break the immersion for some. So BioWare fixed it with the remaster, for not just Miranda, but all characters, with camera angle changes. This was seen in the first Mass Effect when Nihlus, Anderson, and Shepard are preparing to offboard on Eden Prime. It’s also present with the Miranda heart-to-heart.

When news of the revised scenes hit before the release of the remaster, so many gamers were upset. Videos, articles, long threads all over the internet were calling for the remaster to be canceled over censorship claims. It was a whole thing. Now, it doesn’t have to be, if that’s your fancy.

For those that are itching for booty, this mod right here restores all of the Miranda scenes from both Mass Effect 2 and Mass Effect 3. The mod’s author had just one simple message to say about the mod: “Steel your eyes, and pinch your nose! Now you can enjoy the sight of this woman’s backside as she talks about extremely sad and serious things, just like you used to. *Brrrrrap, brap*”

Enjoy, there’s a surprise when you play with it installed. Volume up.